After last night’s game, the Grizzlies looked to rebound without Jon Puskar. Troy Redmann drew in for his first start in seven games, while Garrett Haar made his home debut for the team.

Colorado jumped out to a 3-0 shot lead in the first four or so minutes of the period, but Redmann looked exceptionally sharp, and the Grizzlies managed to stay out of trouble.

Martin Nemcik took a high-sticking, and the penalty kill was very short lived as Cam Maclise opened the scoring to put Colorado up 1-0 at 5:27.

The Grizzlies came back with a vengeance though, and Austen Brassard had a monster shift that he capped off with an assist. Michael Pelech got the goal, and Phil Pietroniro drew the secondary assist.

The Eagles got some chances of their own afterwards, but Redmann shut the door with a couple of very nice saves.

Travis Howe came in like a wrecking ball shortly thereafter, leveling Darryl Bootland and Sean Zimmerman on one shift, to the great delight of the 6,222 fans in attendance.

Utah drew a power play of their own at 15:03, and though they only got one shot, they played well, holding the zone for the majority of the man advantage.

At the end of 20, Colorado held an 18-5 shot advantage, but the game was tied at one a piece. Predictably, a crowd gathered as the teams separated at the buzzer, and Howe had to be restrained from further taunting of the Eagles’ bench.

The second period began on the remainder of the Grizzlies’ power play, which went about as well as their power plays have gone against Colorado, and Redmann made a stellar shorthanded save. He followed that up with another spectacular save on a Jackson Houck breakaway, but Colorado made it 2-1 shortly thereafter on a rebound.

Things got pretty scrappy after that, as Colin Martin took an elbowing call, and on the same whistle, Zimmerman and Martin Nemcik both got five for fighting. Nemcik won emphatically, and Zimmerman got an extra two for instigation. Nemcik may not have started the fight, but boy did he ever finish it. The Grizzlies were buzzing after that, and when any shots got through, Redmann was well up to the task.

At 13:10 Haar drew an interference call, and the Grizzlies went to the power play. Colorado got yet another short-handed chance, and this time Teigan Zahn buried the puck to put the Eagles up 3-1.

Despite that, Redmann continued to play well, charging out to break up a 1-on-0, and then following that up with another save for good measure.

The Grizzlies took off after that, thanks in part to a phenomenal shift from Howe, and after 40, though still trailing 3-1, the feeling in the crowd was far more positive than it had been the night before.

Utah controlled the play early, skating hard, and getting a glorious chance when a trailing Verpaelst hammered the puck just wide of the net. Haar also had what was perhaps his best look of the night on a big shot from the point.

With 8:27 to go Zahn and Brassard got tied up in a furious shoving match in front of the Eagles’ net, and when the whistle blew, they dropped the gloves. Both got five for fighting, and the crowd was elated.

Unfortunately, despite a valiant effort from the Grizzlies in the final minutes, Colorado scored into the empty net after a lengthy stretch of Utah possession.

“I thought we did a lot of good things,” Head Coach Tim Branham said, when asked about the team’s performance. “We certainly had enough shots to put more than one goal by them, but we couldn’t do that once again tonight. At the end of the day, they worked just a little bit harder than us. We had a good work ethic, for us. Colorado forwards, they work even harder. If you want to have success against them, you need to outwork their forwards, because their forwards are the hardest workers with and without the puck. They shut a lot of things down through the neutral zone. That’s the key to their success, and you’ve got to make sure that you can slow them down, but also transition fast before they can get back. We had a lot of chances, we just can’t put the puck in.”

When asked about the team’s struggles to get shots on net in first periods against the Eagles lately, he answered, “I think it’s just everyone needing to bear down and be ready to play. I thought, still, we had some good opportunities, we just didn’t get shots on them, whether they missed the net, or whatever, we still had some good opportunities. But Colorado had 18 shots. I thought Troy was really good in that first period. He actually did a good job controlling rebounds and killing plays, looked real poised in that first period. He did a good job.”

Utah wore beautiful specialty jerseys for Military Appreciation night, which were auctioned off after the game. C.J. Eick’s jersey went for a sale topping $3,125, and the Grizzlies raised over $22,000 for the Salt Lake City Fisher House! 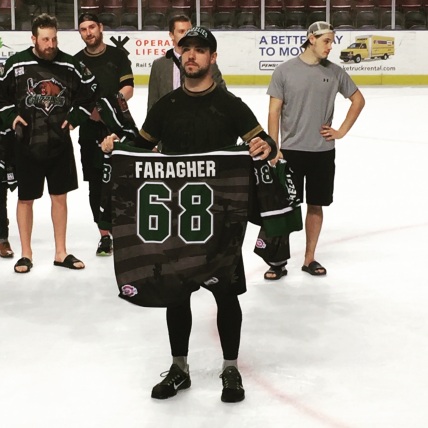 The Grizzlies get one more crack at the Eagles at home on Monday night, before heading out to Colorado for two games, and they’ll need to rediscover their scoring touch if they’re to have any chance at running down the Aces for the final playoff spot.

I'm a hockey obsessed New Yorker and Montreal Canadiens fan, currently living in Salt Lake City. I have a B.A. and M.A. in Medieval Studies, but have decided academia is not for me. I write for Habs Eyes on the Prize, and am the publicist for the Utah Grizzlies' booster club.